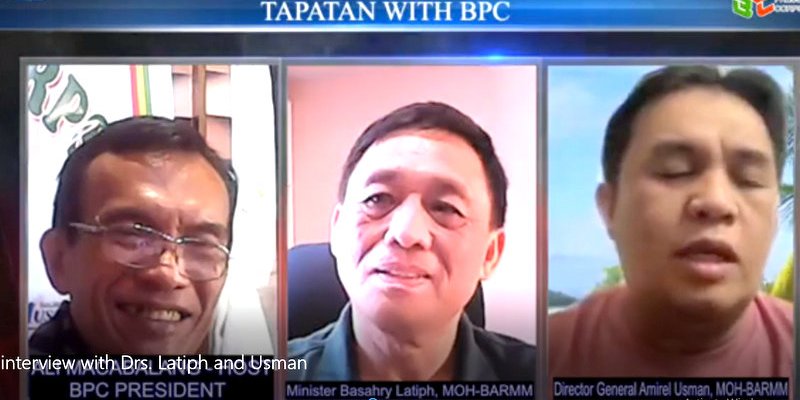 COTABATO CITY – Health authorities of the Bangsamoro Autonomous Region in Muslim Mindanao (BARMM) have urged local leaders to spare medical and health services from political rivalries for the upcoming 2022 polls, pointing out that promoting healthy national and saving life must be beyond political borders.

Regional Health Minister Bashary Latiph and Director General Amirel Usman aired the plea at the Oct. 16 episode of the “Tapatan” Forum of the Bangsamoro Press Corps (BPC), during which they belied claims by adversarial political that the BARMM government has been into partisan politics while rendering dismal performance to its constituencies.

They reacted to recent online videos of Cotabato City Mayor Cynthia Guiani-Sayadi and Maguindanao Gov. Mariam Sangki-Mangudadatu. The mayor asserted that her turf was under BARMM administrative supervision and the city hall would reject support from the regional government. The latter accused the BARMM officialdom of having dismal performance yet active in playing local politics.

Physicians Latiph and Usman argued, saying the Ministry of Health alone is constructing six to eight barangay health stations in Cotabato City and ten in Maguindanao this year and more in 2022.

BARMM-funded RT-PCR laboratories have been built at the Cotabato Regional Medical Center here, and in district and provincial hospitals in Maguindanao, Usman said.

He said that a quarantine facility is under construction at the CRMC compound here while two were already built in the province, with BARMM-hired health and medical workers running such facilities.

He said the Office of the Chief Minister via its Ayudang Medikal mula sa Bangsamoro Government (AMBAG) has so far served 8,552 indigent constituents across the region, including this city and Maguindanao, whose extra hospital bills amounting to as high as P50,000 for one patient were covered.

“What we have provided are undeniable because many of these are infrastructures that can be seen,” Usman said.

He, however, admitted difficulty in giving support health services to barangays here because of the dissenting policy of the city hall, citing an instance of a fire incident at Barangay Mother Bagua where BARMM health and relief teams sneaked in and hurriedly distributed relief aids to elude from physical confrontation with city officials and supporters.

Last January, the Department of Health central office represented by Undersecretary Abdullah Dumama announced an eventual turnover of its facilities and functions to the MOH-BARMM. But the DOH-Region 12 leadership sought a grace period until the end of this year, Latiph and Usman said.

They hoped the turnover would push through as promised. But they pointed out that pending such a process, health aids from the BARMM government for the people of this city should not be rejected because saving lives has no border in all dimensions like politics.

In fact, the two officials announced that the national policy in the midst of the health pandemic and pre-election time prescribes for “good health for good politics.”

Mayor Sayadi and Sulu Governor Sakur Tan had openly opposed the inclusion of their turfs in the BARMM territory but were outvoted in the 2019 plebiscite. Basilan Rep. Mujiv Hataman reportedly joined the mayor and governor in the proposed extension of the BARMM transition period from 2022 to 2025. The dissenting trio was joined “discretely” by Maguindanao Gov. Sangki-Mangudadatu, the BARMM leadership disclosed.

The lady governor alongside her husband-Governor Suharto “Teng” Mangudadatu of Sultan Kudarat was among first political leaders to have signed manifestos supporting the BARMM transition extension. But the governor shifted into an opposing stance when Maguindanao Rep. Esmael “Toto” Mangudadatu came into the picture, Member of Parliament Ali Sangki, father of the lady governor, hinted in a recent post.

BARMM Chief Minister Ahod “Hadji Murad” Ebrahim has said the sustained opposition of the mayor and the governor prompted the United Bangsamoro Justice Party (UBJP) to field its slates of candidates in this city and Maguindanao led as standard bearers, respectively, by former City Councilor Bruce Matabalao and Rep. Mangudadatu. The lawmaker was one of the main authors in the House bill on BARMM transition extension.

UBJP sources said the dissenting quarters have allegedly campaigned also for President Duterte to veto the House-Senate ratified bills on 2022 poll postponement and transition extension in more intense fashion than they did in past efforts persuading the Chief Executive to stand “neutral” during the deliberation stage of the bills in Congress. The President issued an urgent certification after the Senate passed its version.

In a recent report by the Philippine News Agency, Palace Spokesman Harry Roque hinted the possibility of the harmonized and ratified bills to lapse into law in case the President would meither veto or sign the measure.

Ebrahim the UBJP, which he chairs, wanted to ensure that elected constituent-provincial and city officials are allied or partners with the BARMM officialdom in pushing for a “moral governance” agenda. (AGM)