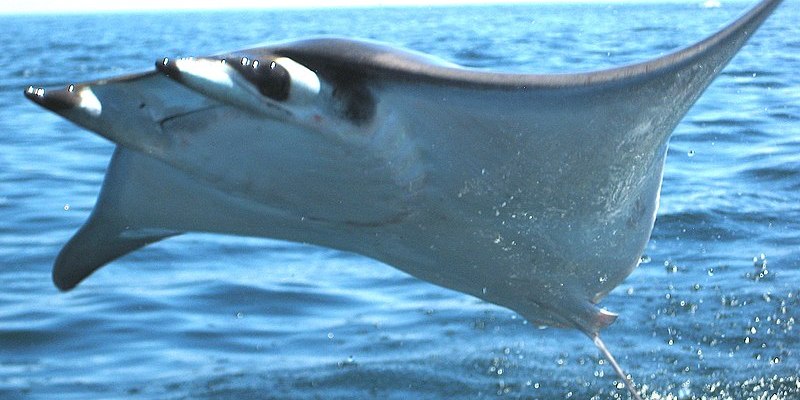 Mobulid ray is a genus of ray belonging to the taxonomic  family Myliobatidae (eagle rays).  Species of this genera are often collectively referred to as “devil rays”, “flying mobula” or simply “flying rays”.

Scientifically the mobulid rays belong to one family called Mobulidae, which contains two Genera; the Mobula Rays (9 species) and the Manta Rays (2 species). They are cartilaginous fishes (no bones)  and characterized by diamond shaped bodies and wing-like pectoral fins which they use to propel themselves through open water.

All are filter feeders, using their mouths and modified gill rakers to strain plankton and small fishes  from the water. In general, mobula rays are much smaller than the mantas and can be distinguished by morphological differences in their mouths and cephalic fins (‘head fins’).

Mobula rays have a bottom jaw which is undercut, so that when their mouths are close to the edge of the lower jaw rests much further back than the upper, whereas manta ray’s jaws are aligned evenly. The other differentiating anatomical feature is the shape of the cephalic fins, which when rolled up look like horns  or tanduk projecting off their heads, hence the name “Devil Rays”.

The primary function of these fins is to help funnel planktonic food into the gaping mouths of the ray’s when they are feeding.  Unfurled, the mobula ray’s cephalic fins are just a flap, but in the mantas these fins unravel to form much  larger paddle-like structures which touch in the center to form a complete funnel around the mantas  mouth.

Local name of the mobula are pagi baling since their main diet is acetes which the natives called as baling. It is also calledby theSama Dilaut as pagi salindang since it resembles the malong or drape worn across the shoulder of native women.   The giant mantas a called pagi sanga or pagi bulan.

They are classified in the  Red List of  International Union for Conservation of Nature (IUCN)  as Vulnerable and  listed as  Appendix II under  Convention on International Trade of Endangered Species.

In accordance with the RA 9147 otherwise known as the Wildlife Resources Conservation and Protection Act and the Revised Fisheries Code RA 10654, it shall be unlawful to fish or take, catch, gather, sell, purchase, possess, transport, export, forward or ship out species categorized by the IUCN and CITES as threatened or vulnerable.

In Tawi-Tawi,  there is an existing mobulid fishery which is not distinguished with mantas.  While the exploitation of other rays like the kyampaw is not banned, the exploitation of this species still continues because they are as source of food as  native delicacy like siyagul pagi  and source income for the fisherfolks.

Enforcement of the ban on fishing has been weak thereby increasing their vulnerability to fishing pressure. There was therefore a need to rapidly assess this traditional fishery in Tawi-Tawi mostly done by the Badjaos and Sama.

The goal of this study is to contribute to the state of mobulid rays in the Philippines thereby helping build a comprehensive country level picture of manta and mobula ray distribution, fishery, and trade. This broad level work identified more in-depth investigation, collaboration, and development of policy recommendations.

A rapid assessment survey on the mobilid ray fishery was conducted in 5 municipalities of Tawi-tawi using Key  Informant Interviews (KII’s)  and Focus Group Discussions (FGD’s) to gather demographic and  fishery profile. This is the first such study conducted in this part of the country.

Fourteen (14) barangays with  (48) fishermen/respondents participated in this study on the demographic profile, the highest average percentage (42.64%) belonged to age group (31-40 years old).  The average educational attainment is only elementary level at 52.55% while 53.67 % of the fishermen, who are all married have an average  of 2-4 children.

The average Annual Family Income is PhP40,953 from fishing and seaweed farming and other sources.  Eighty three (83%) of the fishermen own  their fishing craft which  are motorized. Fishing ground where mobulids frequently occur or sighted were identified.  They occur either alone or in groups and usually during the southeast and northwest monsoon and when acetes and juvenile sardines are in abundance during the dark phase of the moon.

On the perception on the trend of landed catch majority claim that it is decreasing. On the trade, it is sold fresh or dried in the local market but it is the gill raker that has the higher commercial value which when dried can reach as much as PhP1,800-3,000/kg.

On the perception of enforcement, majority of the respondents have no knowledge that RA  9147 otherwise known as the Wildlife Resources Conservation and Protection Act of 2001 and that this prohibits the catching and selling of mobula and manta rays.

Enforcement agencies are hesitant to enforce the ban because of the absence of a substitute income source for the natives. Recently there was a case of Mobula ray identified by Dr. Jom Acebes a Filipino expert on rays as Sickle-fin Devil ray, Mobula tarapacana  that got stranded in the Bongao Channel. Some Bajau fishermen tried to spear it and the men from the  1st MSOU  of the PNP tried to rescue it. Unfortunately it died because the rescue came a little late.To reduce the pressure on this species the following are recommended: Intensify IEC on the status of the mobula species and their role in healthy ecosystems; study mechanisms to regulate the mobulid fisheries and gear modifications in order to mitigate or reduce by-catch. FILEMON G. ROMERO